Class IX  Math  Chapter 14: Statistics Top Definitions ,Test papers NCERT  S0lution,Sample Papers
1. Facts or figures collected with a definite purpose are called data.
2. Statistics deals with collection, presentation, analysis and interpretation of numerical data.
3. Arranging data in a order to study their salient features is called  presentation of data.
4. Data arranged in ascending or descending order is called arrayed data  or an array.
5. When an investigator with a definite plan or design in mind collects  data first handedly, it is called primary data.
6. Data when collected by someone else, say an agency  or an investigator, comes to you, is known as the secondary data.
7. Variable is a quantity that assumes different values.
8. Range of the data is the difference between the maximum and the  minimum values of the observations.
9. The small groups obtained on dividing all the observations are called  classes or class intervals and the size is called the class size or class  width.
10. Class mark of a class is the mid value of the two limits of that class.
11. A bar graph is the diagram showing a system of connections or  interrelations between two or more things by using bars.
12. A histogram is the bar graph such that the area over each class interval is proportional to the relative frequency  of data within this interval.
13. The number of times an observation occurs in the data is called the frequency of the observation.
14. A frequency distribution in which the upper limit of one class differs from the lower limit of the succeeding class is called an Inclusive or discontinuous Frequency Distribution.
15. A frequency distribution in which the upper limit of one class coincides  from the lower limit of the succeeding class is called an exclusive or continuous Frequency Distribution. Get the Power of Visual Impact on your side
16. A bar graph is a pictorial representation of data in which rectangular bars of uniform width are drawn with equal spacing between them on one axis, usually the x axis. The value of the variable is shown on the other axis that is the y axis.
17. A histogram is a set of adjacent rectangles whose areas are  proportional to the frequencies of a given continuous frequency distribution.
18. The Cumulative Frequency of a class-interval is the sum of frequencies  of that class and the classes which precede (come before) it.
19. The mean value of a variable is defined as the sum of all the values of  the variable divided by the number of values.
20. Median is the value of middle most observation(s).
21. Mode of a statistical data is the value of that variate which has the maximum frequency.
22.  When constructing a histogram with non-uniform (unequal) class widths, we must ensure that the areas of the rectangles are proportional to the class frequencies.

Remember that the histogram differs from a bar chart in that it is the area of the bar that denotes the value, not the height. This means that we would need to consider the widths in order to determine the height of each rectangle.
Adjusted frequency = [(Minimum class size)x(frequency)]by Class size

The following frequency distribution gives the masses of 48 objects measured to the nearest gram. Draw a histogram to illustrate the data.

Evaluate each class widths. Since the class widths are not equal, we choose a convenient width as a standard and adjust the heights of the rectangles accordingly. 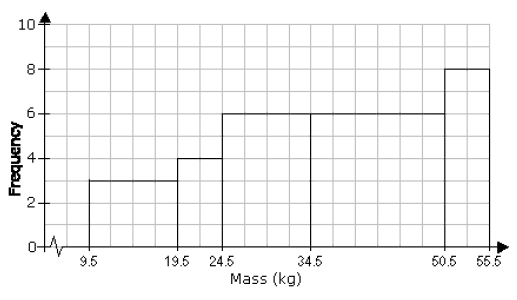